Heightened Regulation of the Stock Market: What Directors of Listed Companies Need to Know

The Securities and Futures Commission (“SFC”) and The Stock Exchange of Hong Kong Limited (“SEHK”) both shifted their enforcement strategies and priorities after the conclusion of their joint consultation in 2017 in relation to the regulation of listed companies. In this article, we discuss the impact of such changes.

In the past two years, in-line with their publicly announced enforcement strategies and priorities, both the SEHK and the SFC have stepped up regulation of the stock market. The SEHK is increasingly taking enforcement action against listed companies and their directors for misfeasance, whilst the SFC is increasingly taking a proactive and interventionist role in pre-empting misfeasance.

Our review of enforcement action taken by the SEHK from the past 3 years confirms that the SEHK is enforcing the Listing Rules more aggressively. 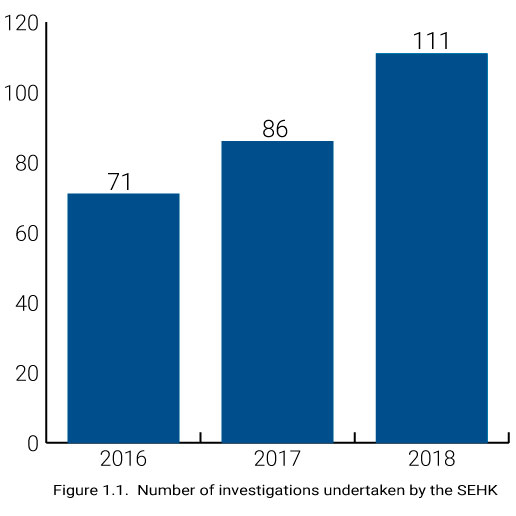 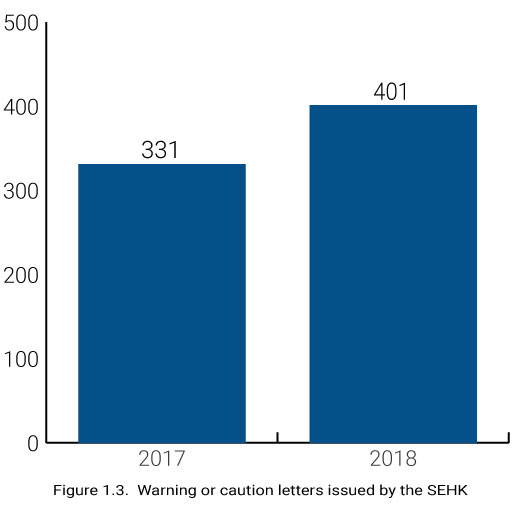 Our review suggests that SEHK investigations have focused on 7 key areas, namely: 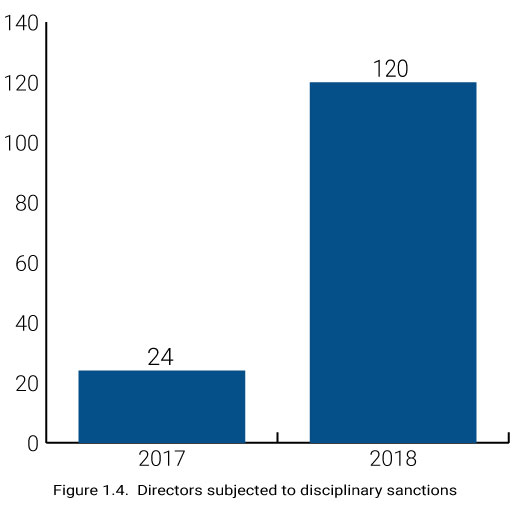 However, it is significant to note that a common breach by directors is a failure to cooperate with investigations or enquires conducted by the SEHK, which includes failing to promptly and openly answers questions addressed by the SEHK to him or her. Sanctions for this type of breach would normally include a public censure and the Exchange stating that such conduct will be taken into consideration in assessing suitability should the person wish to become a director of another issuer in the future.

In contrast, the sanctioning power of the SEHK as a regulator is inherently limited as the Listing Rules are non-statutory in nature. As a result, a breach of the Listing Rules by itself cannot result in imprisonment or fines.

Equally, the SFC’s information gathering powers are far more extensive and compelling than those available to the SEHK. Whereas directors of companies listed on the SEHK may ignore enquires from the SEHK with the consequence only of a reprimand, the failure to comply with a demand for information issued by the SFC may result in criminal penalties.

Given significant limitations in the SEHK’s sanctioning and information gathering powers, it is notable that the SFC and the SEHK appear to have generally allocated responsibility for punishing corporate misconduct to the SEHK. Whilst the SFC does continue to pursue enforcement action for serious misconduct, its primary focus appears to have shifted towards pre-emptive action to avoid serious misconduct.

The “front-loaded” approach to regulation has meant a focus by the SFC on early intervention, meaning that the SFC now seeks to directly intervene in cases where it suspects serious corporate misconduct at the stage where the transaction is “proposed” or prior to the listing of company. In this regard, the SFC may rely upon their powers under the Securities and Futures (Stock Market Listing) Rules (“SMLR”) to object to the listing of the securities of a company on the SEHK, to impose suspensions on trading of securities of a company listed on the SEHK, or to delist a company from the SEHK. Under the SMLR, the SFC has wide discretion to exercise such powers. For example, the power to object to a listing application or to suspend a listed company may be exercised when the SFC considers that it is in the interest of the investing public or any false, incomplete or misleading information is contained within the listing application or any document connected with the listed company. The SFC may also impose a suspension if it is necessary or expedient in the interest of maintaining an orderly and fair market in listed securities. Finally, the SFC may delist a listed company if it considers that the cancellation is necessary to maintain an orderly market in Hong Kong.

Our review of SFC action in the corporate finance arena shows a marked increase in the SFC’s use of its powers under the SMLR, confirming the SFC’s stated goal of front-loading their regulatory approach. The SFC was involved in cases concerning the potential or actual deployment of their powers under the SMLR 46 times in 2018 and 32 times in 2017. In comparison, prior to the introduction of the front loaded approach in July 2017, the SFC only deployed their powers 3 times in 2016 ( Figure 1.5.). 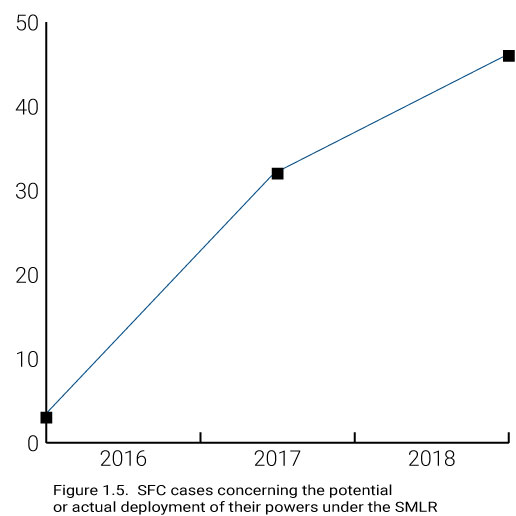 For the purpose of determining whether to intervene, leveraging their statutory powers, even in the absence of an enforcement action, the SFC can require a person to describe the circumstances in which a document was prepared or created, to provide the details of all instructions given or received in connection with the preparation of the documents and to provide an explanation of the reasons for the making of entries contained in (or omission of entries from) the document.

The SFC “front-loaded” approach to regulation has come at the same time as a fall over the past 3 years of roughly 50% in the number of investigations initiated, criminal charges laid, notices of proposed disciplinary action issued and compliance advice letters issued by the SFC. In 2015, the SFC initiated 515 investigations. After the front-loaded regulatory approach was announced, the number of investigations started dropped immediately to 280 in 2017 and to 238 in 2018. Similarly, the number of criminal charges laid by the SFC dropped from 107 in 2015 to 42 in 2018. The SFC issued 35 notices of proposed disciplinary action in 2015 whereas the number issued dropped to 22 in 2018. Finally, the SFC issued only 234 compliance advice letters in 2018 whereas in 2015, the SFC issued 453 such letters ( Figure 1.6.). 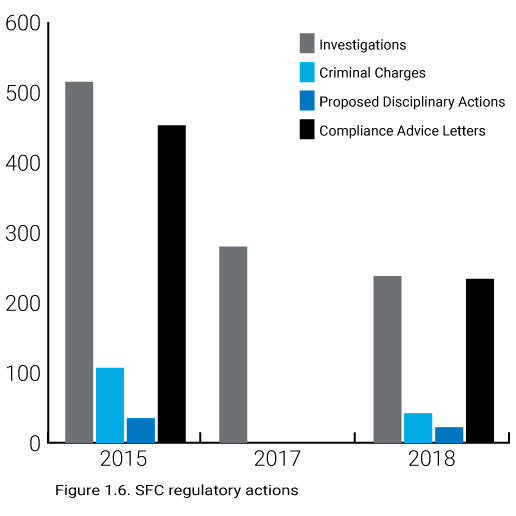 In recent months, for example, we have seen the SFC take action against directors of listed companies through the Market Misconduct Tribunal and the Hong Kong courts for late or inaccurate disclosure of price sensitive information. For example, the SFC commenced legal proceedings in the Court of First Instance to seek disqualification orders against former directors of Luxey International (Holdings) Limited in relation to the publication of false statements in the company’s announcement and circular in respect of a very substantial acquisition and the former chief financial officer, company secretary and executive director of Fujian Nuoqi Co., Ltd in relation to the disclosure of inaccurate information about the use of the global equity offering proceedings in the company’s annual report. Similarly, the SFC commenced proceedings in the Market Misconduct Tribunal against Health and Happiness (H&H) International Holdings Ltd and its chairman in respect of their failure to disclose the company’s financial deterioration in a timely manner.

Interaction Between The Sehk and The SFC

Prior to the announcement of the SFC’s “front-loaded” approach, it was the exclusive role of the SEHK to regulate listed companies. Since then, the SFC’s enforcement policy shifted towards focusing more on serious corporate misgovernance involving listed companies and less on intermediary misconduct and market misconduct. At the same time, the SEHK increased the number of investigations and regulatory responses issued against both listed corporations and their directors. Our review also shows that the SEHK refers to the SFC any conduct which may amount to a possible breach of the SFO and that the number of SEHK referrals has increased markedly, from 24 in 2016 to 47 in 2018 ( Figure 1.8.). If the present trend continues, it is not unforeseeable that the SFC would eventually usurp the role of the SEHK as the primary frontline regulator of listed companies. Such a result would likely result in a more rigorous approach to the regulation of listed companies given the much more powerful tools available to the SFC as compared to the SEHK. 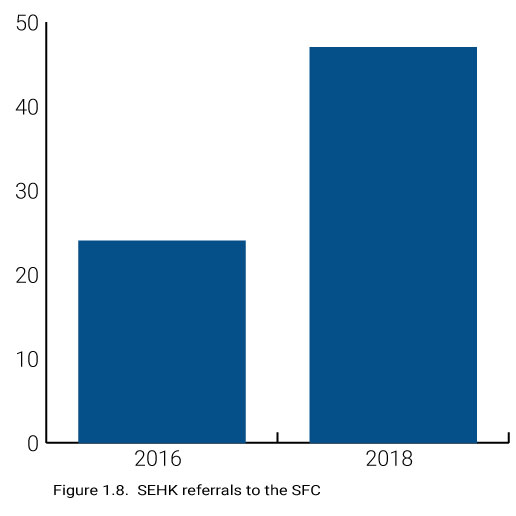