In June 2020, the Securities and Futures Commission (“SFC”) published its Annual Report 2019-2020 (“2020 Annual Report”) to summarize its regulatory work. The report provides data on the latest regulatory approach to SFC inspections as well as SFC enforcement action during the period from April 2019 to March 2020 against SFC licensed corporations. The report provides a window into the SFC’s operations at both the SFC Enforcement Division and the SFC Intermediaries Division and hence, the level and areas of compliance risks for SFC licensed corporations. 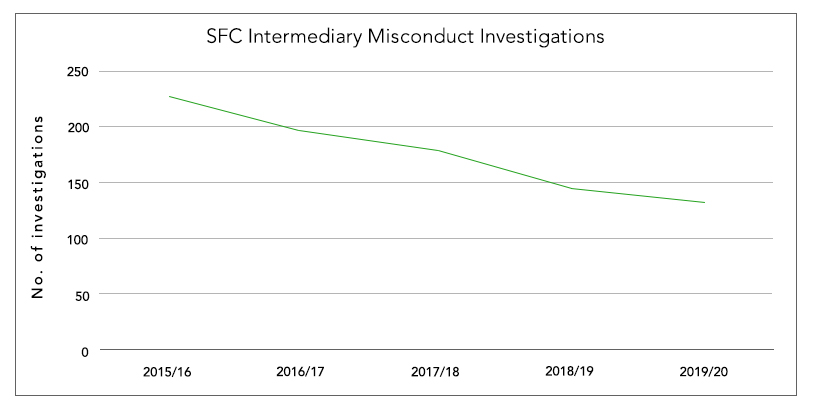 The 2020 Annual Report data on SFC enforcement actions is consistent with the SFC’s “less is more” approach to narrow its enforcement focus on fewer but bigger, “high impact” cases to address key risks. Equally, it is consistent with the SFC’s stated position of prioritizing intermediary misconduct. In the last SFC Enforcement Reporter published in February 2018, the SFC identified intermediary misconduct as one of its enforcement priorities. Similarly, in the 2020 Annual Report, the SFC identified intermediaries regulation as one of its current initiatives under its “Strategic Priorities”, stating that the SFC will adopt a risk-based approach to licensing and supervising intermediaries by focusing on the greatest threats and systemic risks.

The latest year’s data suggests that where SFC licensed corporations are investigated by the SFC Enforcement Division, their responsible officers are increasingly likely to face individual consequences. Indeed, where an SFC licensed corporation is subject to disciplinary action, there is a marked increase in the likelihood that its responsible officers may face disciplinary action. It is unclear whether this is a long term trend or an outlier based on last year’s circumstances. 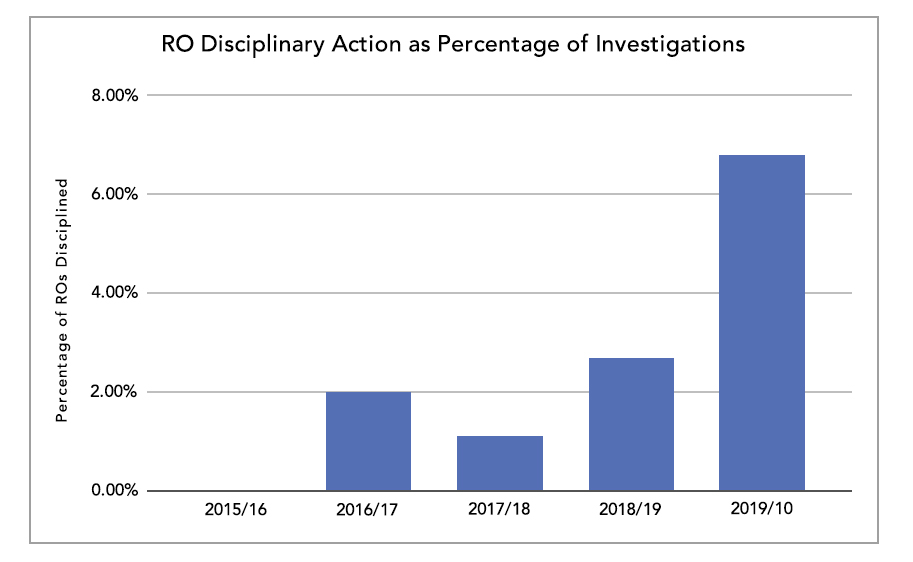 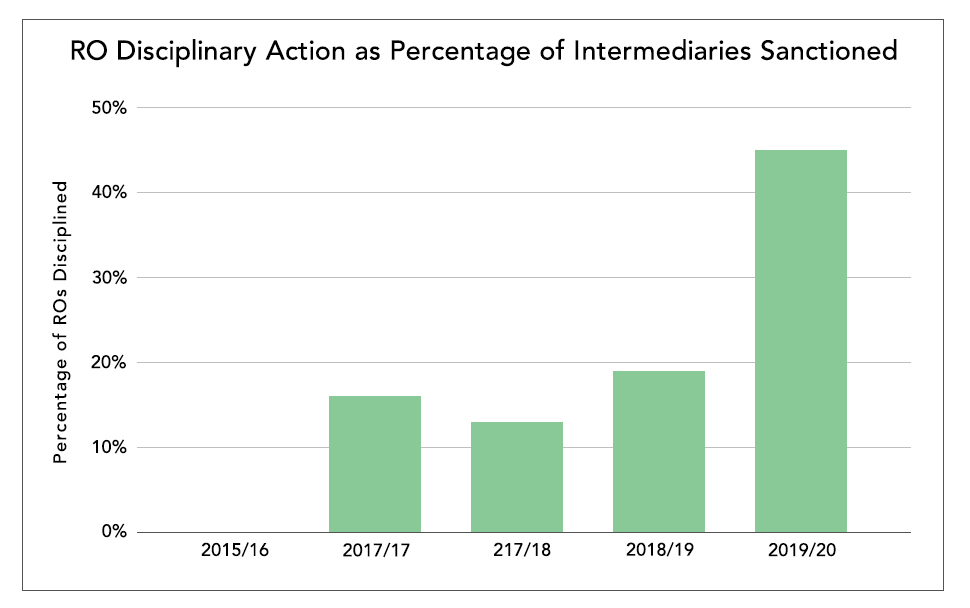 Examples of responsible officer deficiencies leading to SFC enforcement action in the past year included: 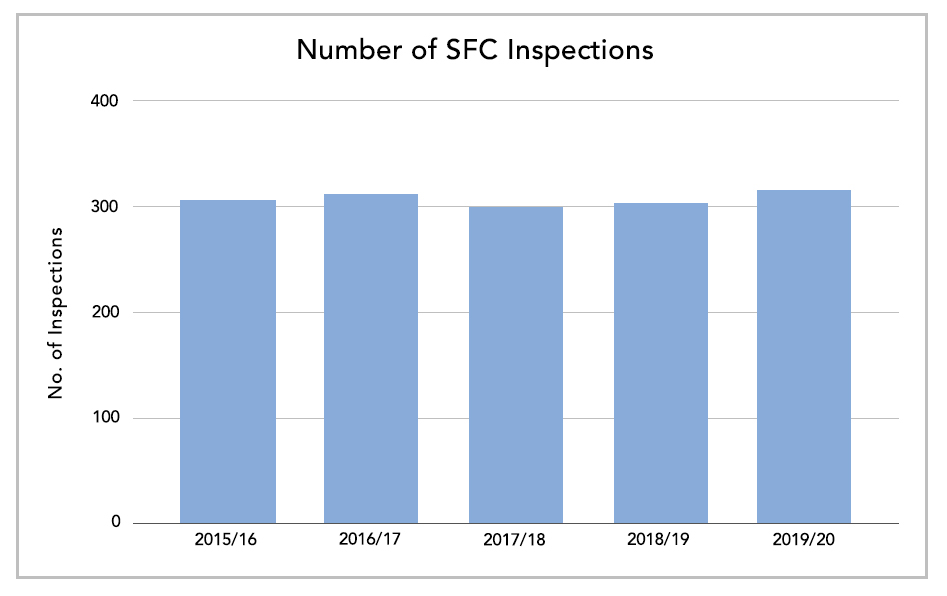 During an SFC inspection, the SFC will enter the premises of an SFC licensed corporation, make enquiries about its day-to-day business activities and inspect and make copies of documents relating to the business and any transactions carried out. The SFC may select sample transactions from the documents obtained and conduct a walk-through on site. This walk-through may involve the SFC speaking to staff to ascertain the actual workflow and reviewing documentation specific to a transaction or client.

The 2020 Annual Report shows a significant increase in the number of cases of non-compliance with anti-money laundering (“AML”) guidelines identified during SFC inspections. In 2017-2018 and 2018-2019, there were respectively 175 and 201 AML-related breaches but in 2019-2020, the number of breaches surged to 331, representing an almost 65% increase compared to the breaches recorded in the previous year. 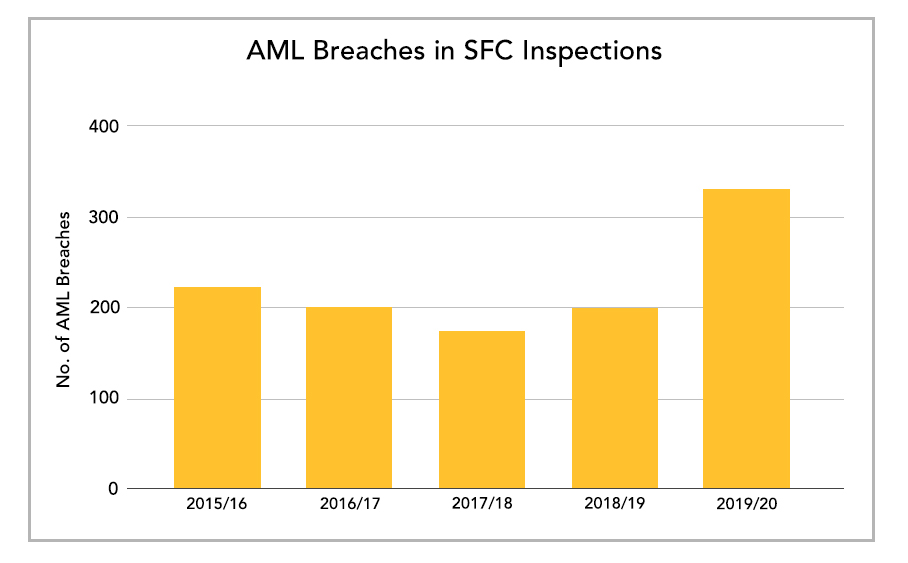 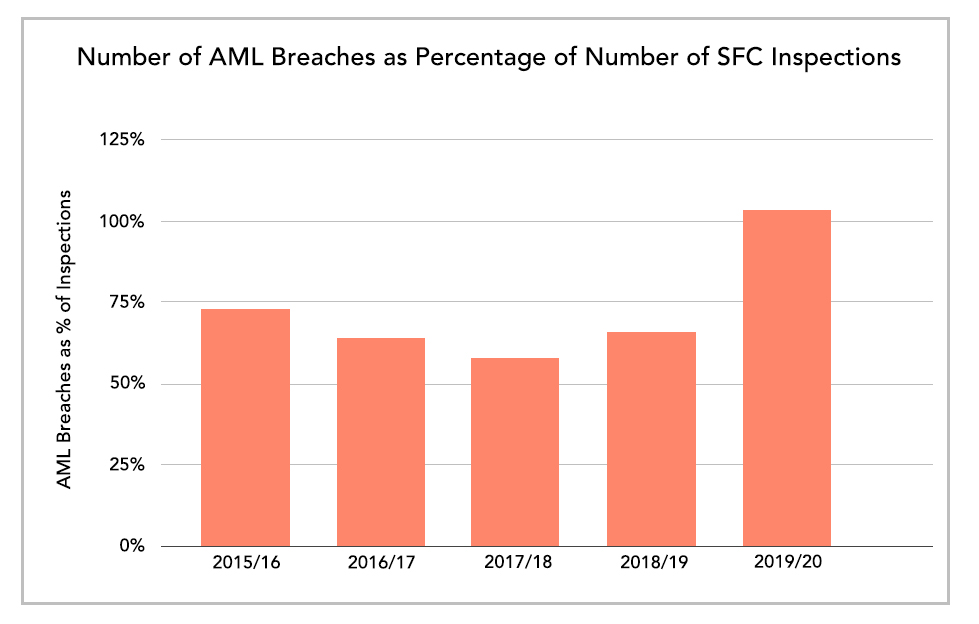 These breaches identified in SFC inspections relate to non-compliance with the SFC’s Guideline on Anti-Money Laundering and Counter-Terrorist Financing (“AML Guideline”) published for the purpose, amongst other things, of complying with the Anti-Money Laundering and Counter-Terrorist Financing Ordinance (“AMLO”). Examples of AML breaches identified by the SFC include:

As a contextual point, it is possible that the recent significant increase in the number of AML breaches identified by during SFC inspections might be motivated by the fact that around the same period, the Financial Action Task Force (“FATF”) had been conducting a year-long assessment on Hong Kong’s AML/CTF regime against the international standards.

However, it is worth noting that even after the FATF had concluded this assessment, we continued to see SFC enforcement actions targeting AML breaches. Examples of AML breaches recently identified by the SFC in its Quarterly Report April–June 2020 include:

In each of the past 5 years, about one-third of all the breaches noted during on-site SFC inspections related to internal control weaknesses, making it the most common type of breach found among SFC licenced corporations. The data do not suggest any material change in the risk of the SFC finding an internal control failure during an SFC inspection. 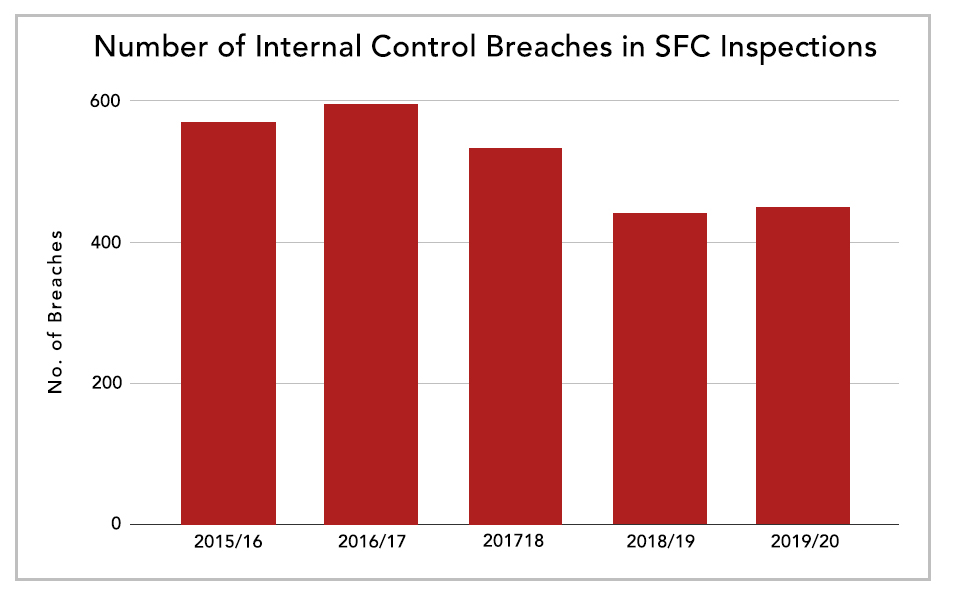 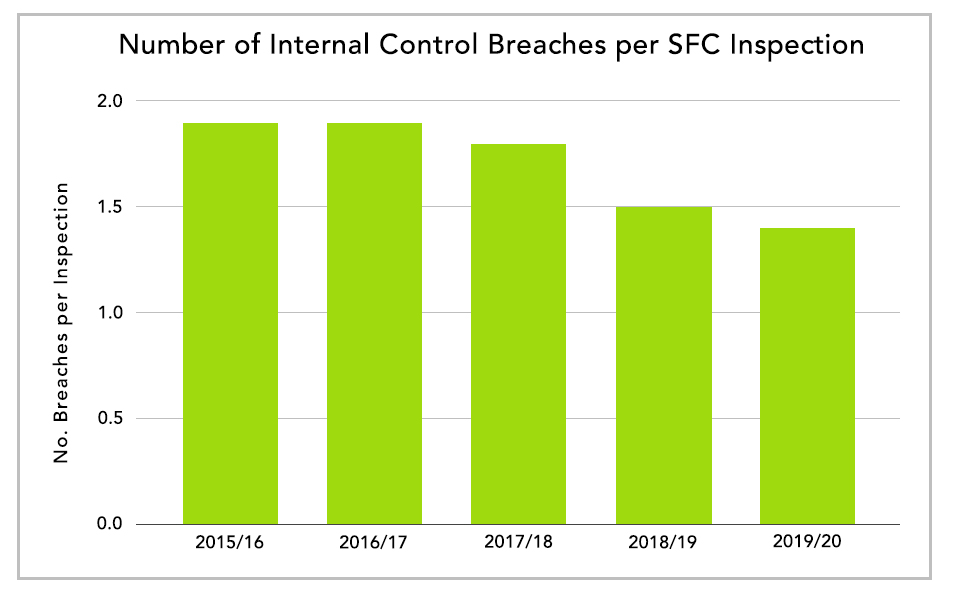 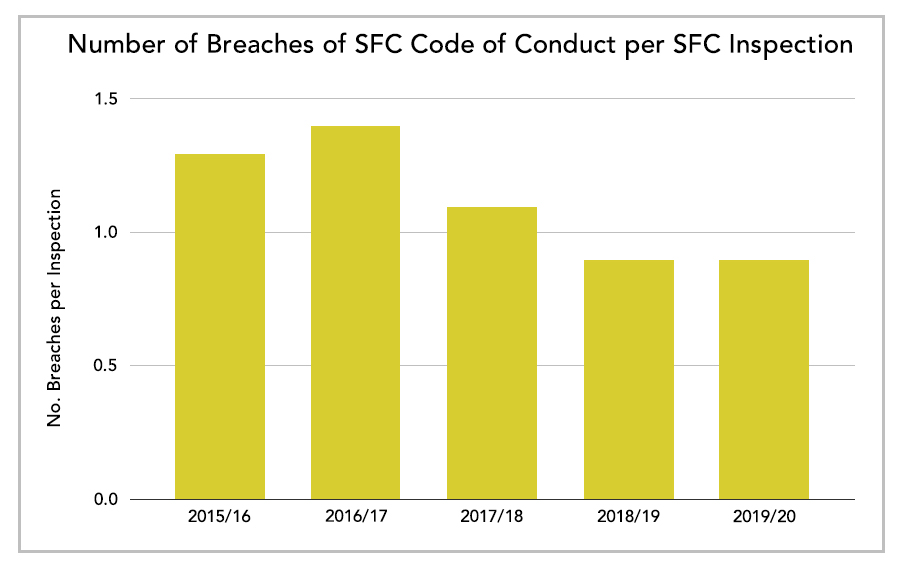 We summarize below some examples of SFC Code of Conduct breaches in 2019-2020 which resulted in SFC enforcement action:

The foregoing data on SFC enforcement action and SFC inspections does not tell the whole story. Anecdotally, the SFC Enforcement Division is collaborating more closely with the SFC Intermediaries Division to address misconduct. For example, we are seeing the SFC Intermediaries Division being more pro-active in handling complaints and reaching out to firms and individuals to make inquiries about business activities and practices even though the persons in question may not be SFC licensed in the first place.