Under s. 45 of the Stamp Duty Ordinance, transfers of Hong Kong stock and immovable property are exempt from Hong Kong stamp duty where the transferor and transferee are associated bodies corporate. Though the definition of an associated body corporate relies upon the concept of “issued share capital”, a recent court decision confirms that bodies corporate without equity interests referred to in common parlance as “shares”, such as English limited liability partnerships(“LLPs”) and U.S. limited liability companies (“LLCs”), may nevertheless qualify for relief. Should you wish to find out more about exemptions from Hong Kong stamp duty, please contact one of our tax lawyers.

Section 45 of the Stamp Duty Ordinance (“SDO”) provides an intra-group exemption from stamp duty for instruments transferring a beneficial interest in Hong Kong stock or immovable property between associated bodies corporate. Under the SDO, the bodies corporate are associated if:

Though the Stamp Duty Office has historically accepted that limited liability companies and limited liability partnerships which are separate legal persons may qualify for relief under s. 45, recent practice has evolved so that such bodies corporate have been refused relief on the basis that such bodies lack “issued share capital” and thus, cannot meet criteria for association.

The organizational chart below shows the structure of the group before the share transfer:

The organizational chart below shows the structure of the group after the share transfer: 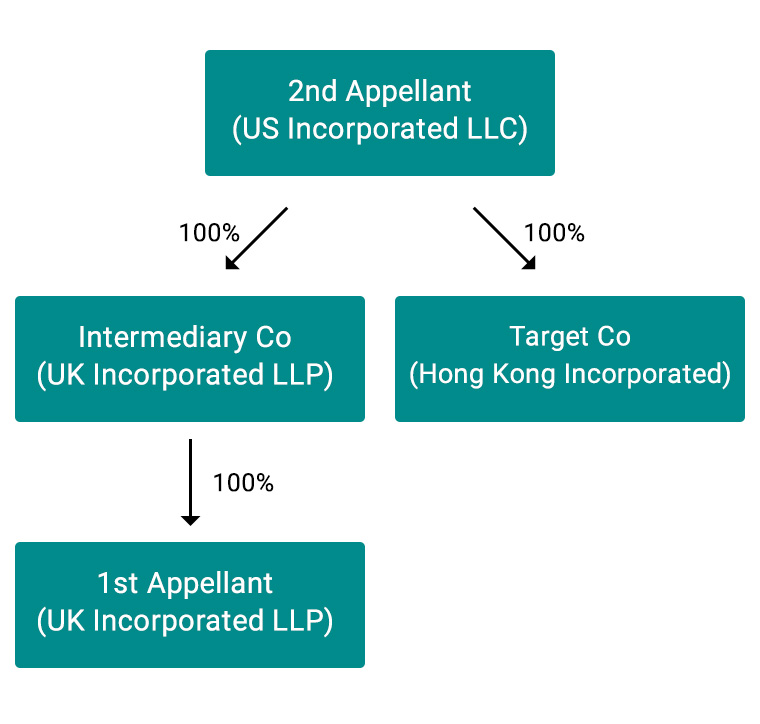 Following the completion of the share transfer, the appellants applied for the stamp duty relief under s. 45 of the SDO. The appellants’ application was rejected by the Collector of Stamp Revenue (“Collector”). The Collector was of the view that though the 1st Appellant and the Intermediary Co at material times were bodies corporate, they lacked “issued share capital” and therefore, could not be associated for the purpose of s. 45 of the SDO. The appellants subsequently lodged an appeal against the assessment to the District Court.

The Court rejected the Collector’s arguments and allowed the appeal.

The Court accepted that the term “issued share capital” was not defined by the SDO. Applying the well-established purposive approach of statutory interpretation, the Court observed that the legislative purpose of s. 45 was to grant stamp duty relief in circumstances where 2 companies involved in the transfer were associated with each other so closely that the transfer was little more than a change in the nominal ownership, rather than a change in the ultimate beneficial ownership.

The Court then looked at the legislative history of s. 45. The section was originally s. 5A of the old SDO. When the Legislature amended s. 5A, it replaced the term “companies with limited liability” with the term “bodies corporate”. The Court took the view that such amendment showed the legislature’s intention to open up the ambit of s. 45 relief to encompass all associated groups, regardless of whether their relevant members were incorporated as companies with limited liability or incorporated in other forms of bodies corporate in or outside Hong Kong.

In light of the legislative purpose and history of s. 45, the Court held that the word “issued” should be interpreted to mean “having been legally given to (those entitled to the share capital) in a legally completed transaction”.

The Court went on to hold that the term “share capital” should not be interpreted to mean that the capital of a body corporate must be divided by way of a denomination into standard units called “shares” that are required to be registered or evidenced by share certificates. Instead, a body corporate would have “share capital” as long as the capital of the body corporate was divided (such division should be legally recognized by the laws of the jurisdiction where the body corporate was incorporated) into quantifiable portions, whether expressed in terms of monetary value or in term of proportions, and all such portions together make up 100% of the total value of the capital.

Applying the interpretation above, since the capital of each of the 1st Appellant and the Intermediary had a nominal value and had been divided into 2 portions expressed in monetary value, which had been taken up and paid for by the initial members, the Court held that the 1st Appellant and the Intermediary had “issued share capital” and therefore could be regarded as associated bodies within the meaning of s. 45.